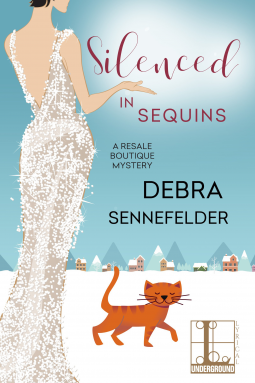 Kelly Quinn is now in charge of her late grandmother’s consignment store. The Lucky Cove Resale Boutique is slowly picking up fame and customers, thanks to Kelly’s experience at an upscale Boutique in New York.

Long Island Ladies (LIL), a reality show where rich ladies catfight for publicity, is the talk of the town. Diana Delacourte, a recent evictee from LIL visits Kelly’s boutique and buys a dress that was previously owned by Wendy Johnson – a contestant at LIL.

Kelly’s Uncle Ralph is hosting a Christmas party. His third wife, Summer, wants to be on LIL and inviting the producer to the party is one way to be on the show. Uh-huh. But things turn sour when Wendy accuses Diana of wearing used dresses. In turn, Diana threatens Kelly (Diana didn’t know that the dress she bought was previously owned by Wendy) and says she will bring Kelly and her boutique down.

Kelly is now worried. So, the next day, she decides to visit Diana and apologize. She finds Diana, in the snow, dead as a duck.

I have read four of the five books Debra has written so far and I have loved them all. Debra writes mysteries with a touch of quirky and this is what makes her one of my favourite authors. 🙂

Silenced in Sequins is the second book in The Resale Boutique series. The first book is called Murder Wears a Little Black Dress. I have enjoyed both the books in this series and if you like cozy mysteries, I recommend you to give this series a try. Silenced in Sequins can be read as a standalone but if you ask me, I would ask you to start from book#1.

Why was Diana murdered? Wendy is the main suspect – no surprises here given that the duo fought at the party. But things change for Kelly when Wendy comes over to her boutique and asks her to prove her innocence. In return, Wendy promises to bring more business to Kelly’s boutique and put in a good word to the producers about Summer (Kelly’s aunt – she’s almost the same age as Kelly).

Detective Wolman warns Kelly and asks her not to interfere. She also asks Kelly not to date her brother Mark anymore. Oh, fish! Mark the McHottie Lawyer – the one Kelly seems to be mesmerized with, is the rude detective’s brother! Anyhoo, warnings or not, Kelly does as she pleases, thank you very much!

It’s not just the murder that Kelly has to solve. Pepper is falling sick often. Kelly doesn’t want to decorate her store for Christmas. There’s also this hutch that she’s supposed to clear. Phew! Murder takes most of her time – well, she’s an amateur sleuth you see; how can you expect her not to poke her nose where it doesn’t belong?

The twists and turns are sure to keep you hooked on to the story. What starts as a murder coz of jealousy turns out to be something else – something that even Kelly did not expect. 😉

Kelly feels guilty for ruining Ariel’s life. She blames herself for Ariel’s injury a decade ago. Although Ariel and Kelly have made amends and are now friends, the townspeople still play the blame game. Humph!

Kelly also deals with bouts of low self-esteem. But she picks up courage every now and then. Rude people? Thank you, next! Or rather, thank you, goodbye! Kelly’s curiosity leads her to trouble – especially when she’s overly curious about murders and tries to solve them.

Kelly’s relationship with Pepper, Breena, Summer, Frankie and Gabe is well-explained throughout the book. Oh, before I forget, there’s a dark cloud named Marvin Childers. Who is he? Someone who might be the reason for Kelly and her boutique’s downfall.

If I have to describe the ending, I would say Unexpected! I did not see that coming! There’s this saying you know – people have killed for less. Well, some people (killers, of course) would do anything for attention.

Well-plotted mystery with a touch of quirkiness, superb character development and an unexpected ending makes Silenced in Sequins a must-read book of 2020.

There’s a giveaway for this tour. If you like to win a digital copy of Silenced in Sequins, check out the Giveaway details here.

Many thanks to Lori for the blog tour invite. Thanks to Kensington Books and NetGalley for the ARC. This is my honest and unbiased opinion.

3 thoughts on “Silenced in Sequins by Debra Sennefelder”

Buy me a coffee