Come one and all!

Reprint of the Year awards is here!

Kate Jackson of Cross Examining Crime has come up with a wonderful idea of sharing your favourite crime reads (reprints, of course) of the year. I am so excited to take part in the nominations party. 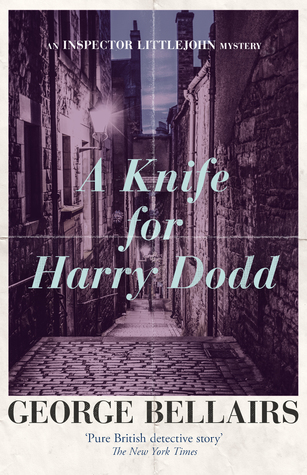 I came across Bellairs Littlejohn series in January this year. I tell you, I really adore this series! Chief Inspector Thomas Littlejohn is the best!

A Knife for Harry Dodd was republished by Agora Books this year. This is the 21st book in the Littlejohn series.

The radio is blaring somewhere and Dorothy and her mum are sitting in the hall, minding their own business. Their work is interrupted by a phone call. Dotty’s beau, Harry asks her to pick him up. As the ladies reach the place, they find Harry stabbed. The poor chap is barely alive. They pick him up, take him home, nurse his wound and put him to sleep. Little did they know Harry would never wake up again.

Harry’s brother is a politician and Harry was somewhat of a black sheep in the family. The brother wants to keep media out of this so Littlejohn is assigned the case. The Dodd family seems to hiding something. The suspects also have secrets of their own. Littlejohn, along with his right-hand man Cromwell, investigate the murder.

Now that Dotty is single, she has her eyes set on every prospective lover – including Cromwell. *wink wink* Then there is the nasty Superintendent Judkins and, excuse me, excuse me, the very polite, Judkin’s assistant – Drane. Excuse me, excuse me. Oh yes, how can I forget to mention the guy named Comfort – the poor thing died in a very uncomfortable accident. Tut tut! Then comes another guy named Glass. Don’t touch him, he’s fragile.

Weirdo characters, quirky writing and excellent sleuthing skills – now you know why I chose A Knife for Harry Dodd for Reprint of the Year award.

Buy me a Chocolate Milkshake

If you appreciate all the hard work I have been putting on this blog and want to say 'keep up the good work', you can do so by buying me a chocolate milkshake.

Ian an Amazon affiliate. This means, at no extra cost to you, I earn a small percentage every time you use the links on this blog to make a purchase

Try Audible Premium Plus and Get Up to Two Free Audiobooks